On Monday, December 12th, 1864, “the neat and picturesque” newly-built church of Rathmichael was consecrated by his Grace the Archbishop of Dublin, the Most Reverend Richard Chenevix Trench.

The Archbishop was accompanied by his chaplain, the Reverend Arthur Dawson, vicar of the new St. Bartholomew’s Church, Clyde Road, Dublin, and among those present were the Reverend J.G. Scott of Bray, the Reverend L.H. Strean of Delgany, the Reverend J .W. Gregg of Greystones and the Reverend T. W. Hackett. of St. James’s, Bray (Crinken). The Reverend John Hunt, incumbent of Rathmichael since 1825, unable to be present through illness, was represented by his two sons. The laity included Sir Charles Comp- ton William Domvile, on whose estate the church was built and we may be sure (although they are not mentioned in the Ecclesiastical Gazette from which we draw the above account) that the Right Hon. James Anthony Lawson,” Attorney-General, of Clontra, Mr Wentworth Erck of Sherrington and Baron Fitzgerald of Killiney, brother-in-law of the rector, were also there.

The Archbishop chose as the text for his sermon I Peter 2 vv 4 & 5, “To whom coming, as unto a living stone, disallowed indeed of men, but chosen of God, and precious; Ye also, as lively stones are built up a spiritual house, an holy priesthood, to offer up spiritual sacrifices, acceptable to God by Jesus Christ” – a text particularly appropriate to Rathmichael whence, in the words of the Venerable Bede, “so many of the living stones have been borne away to the Temple in Heaven”, yet where so many of her ancient stones re- main, silent witnesses to the centuries. The final hymn, “Christ is our Comer Stone” was sung; and thus the ancient parish of Rathmichael after 200 years once again had its own church to carry on the tradition begun so long before.

Despite the winter day and the bareness of the site without the trees which have since grown up to shade and shelter God’s acre, we can picture a charming little ceremony, for church-going in those days and for any years after, was a formal affair.  Horse drawn carriages brought gentlemen in top-hats and morning dress with their ladies in the long full-skirted gowns of the period.  Four years prior to this ceremony, on June 27th, 1860, the piece of ground comprising one statute acre on which our church stands, was given in trust to the incumbent, the Reverend John Hunt and the churchwardens of the parish, James Crofton Dodwell of  Shankill House and Benjamin Tilly of Chantilly and their sucessors for ever, by Sir Charles Domvile of Santry Court and Loughlinstown House, for, to quote the words in the Deed of Conveyance, “the goodwill which he bears to the inhabitants of said Parish and that a Church in which Divine Service according to the Liturgy and Rites of the Established Church of England and Ireland might be erected thereon”.  Sir Charles Compton William Domvile, descendant of a very ancient Norman family settled in England since the Conquest, had inherited his considerable property in the parish (held under the Archbishop of Dublin) from a 17thCentury ancestor whose grandfather had come to Ireland. 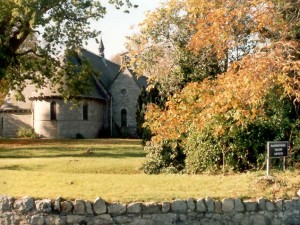 While the present day church is, therefore, only quite young, the parish of Rathmichael is as old as any in the country.  It can trace its history back over seven hundred hears to the early 13th century when, under Anglo-Norman rule, the Celtic monastic church became parochial and about the same time Rathmichael began its long connection with the Cathedral of St. Patrick.

Seven hundred years is a long time, but we can claim even more.  There is evidence that a church of that name occupied the old Rathmichael site for perhaps as many centuries again before the coming of the Normans in 1170, which brings us back to very early Christian days – to not long after St. Patrick himself was living and preaching.  The name is unusual and interesting and may even hold the key to the date of the foundation.  Fortunately, it was not changed at the consecration of the modern church.

Scholars in the nineteenth century believed that the second part of the name did not refer to the Archangel, a dedication quite out of keeping with what we know of the Celtic Church where custom almost invariably gave a church the name of its founder, but that it was a anglicization of the Irish MacTail (genitive of Tail, an adze or carpenter’s tool), both names sounding similar in Irish.  They believed that the founder of Rathmichael was Bishop  MacTail  of Kilcullen, Co. Kildare, whose death is recorded in the Annals at 550 A.D.  There seem to have been strong links connecting him with St. Patrick, some even claiming that he belonged to the Saint’s household, although on grounds of age it would appear more likely that it was his father, a carpenter (hence the name by which the Bishop is known).

Some believe there are grounds for thinking that MacTail  must at one time have been patron saint of Dublin – his name having been invoked to chase the foreigners out of Dublin as recorded in the Annals.  This is the entry in the Annals of the Four Masters, the age of Christ 937, the twentieth year of Donncadh – “Gall do dergu atha Cliath i Amhlaoibh mac Gotfrith, tre furtacht De agus MacTail” (“The foreigner was banished from Dublin by the help of God and MacTail).

The feast day of MacTail  is June 11th.